Boo-Boo with the Bamboo Bike 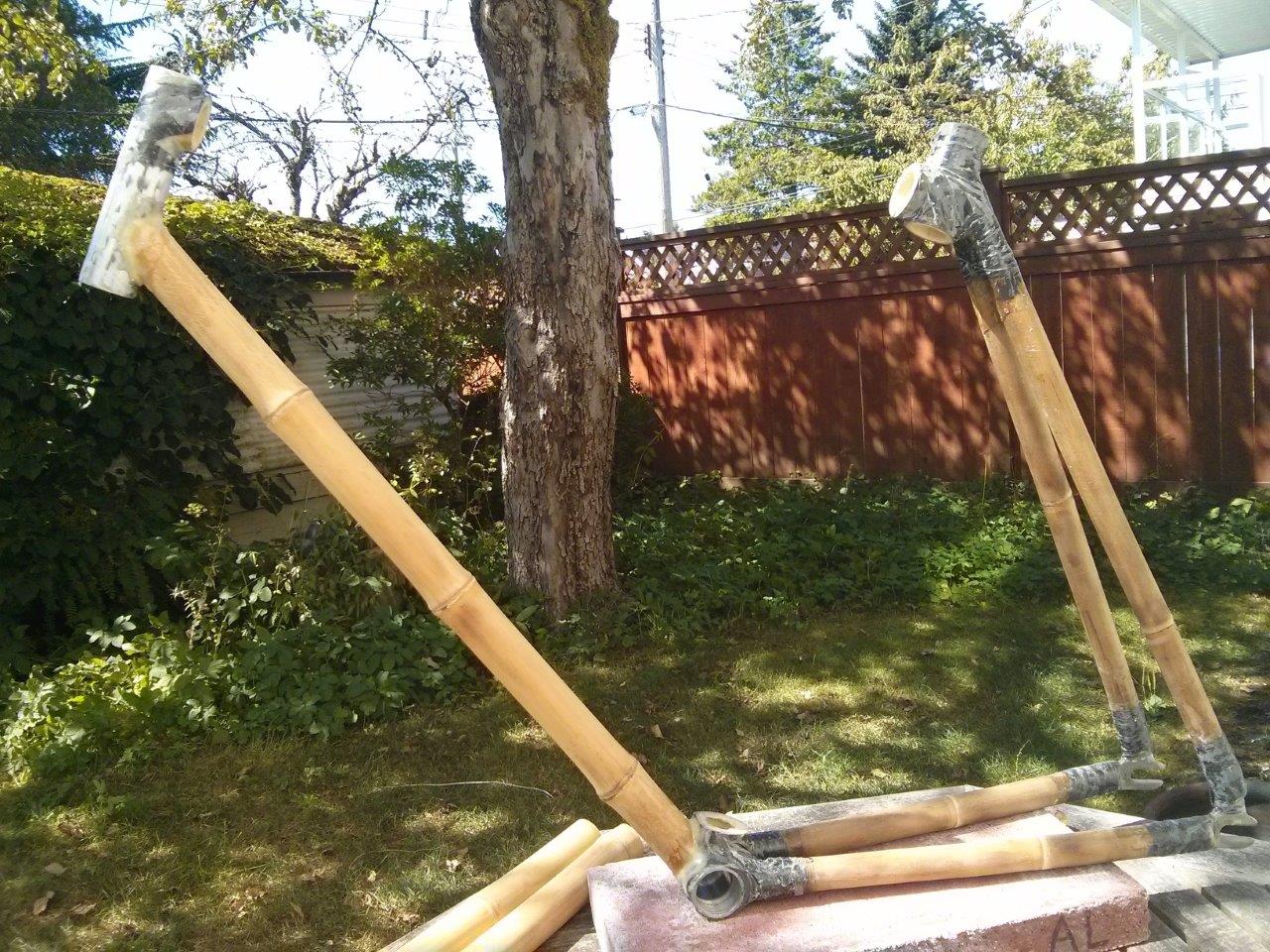 As you probably already know, I made a bamboo bike which I’m very proud of. However, what you probably don’t know is that I made some mistakes in the process. The photo above shows the result of one of these progress speedbumps, and yes, I did indeed cry the day I had to cut those tubes out.

I started this project in November 2013 but failed to finish due splitting bamboo. Progress was moving forward: I had the bamboo, carbon fibre, and epoxy ready for frame building, and the poles were in the process of being cut and shaped to size. However, winter was quickly approaching and the weather was becoming less and less ideal for carbon fibre layup. The epoxy I was using had a working temperature above 10°C, but the outside temperature was beginning to drop below that. I was able to keep it in its liquid state by using my mother’s hair dryer (don’t tell her though since she still doesn’t know…), but the epoxy wasn’t the main issue. Apparently bamboo is a living thing and doesn’t like drastic changes in temperature. Turns out doing the layup in colder temperatures, then bringing the frame inside to dry in warm, livable temperatures wasn’t good for the bamboo. Moisture is the devil here, and causes the wood to expand and contract based on the current environmental conditions.

A week of thermal cycling like so, and I had myself some cracked bamboo. I was heart-broken. It was the end of December at this point, so I decided not to continue with this project until the weather warmed up.

Once spring came around, I set off to Chilliwack to get myself much higher quality materials from Bamboo World. I was significantly more meticulous in heat treatment this time around, conducting an oven bake as well as direct heat treatment to remove as much moisture as possible and to cure the bamboo.

I weighed my options in what to do about the frame, whether to start from scratch or try to salvage it. Being both optimistic and lazy, I chose the latter. I figured I should be able to cut out the compromised tubes and simply replace it with new ones. The joints would be a bit bulkier from the leftover carbon fibre, but that would merely be an aesthetic issue. To replace the entire front triangle, I had to be strategic in the order of extraction and replacement to preserve the steerer tube geometry. Luckily I didn’t mess that up, so it became a matter of starting off where I left off. Seven steps back, 3 steps forward!

Eventually I managed to finish the bike, and everything else worked out in the end…

… Except not. Turns out bamboo really doesn’t like moisture. Two winters later and this happened:

Another split down the seatpost :(

Despite all my efforts in heat treatment, wood sealing, and surface finishing, the bamboo still managed to crack. Initially I was only going to ride this bike in dry weather, but come on, it’s Vancouver aka the “Wet Coast”. From the photo above, all the road grime clearly didn’t do the frame any favours. The dirt/sand slowly withered the clear coat away (5 layers of it, by the way) and moisture slowly made its way into the bamboo.

But to heck with it, I’ll keep riding it to the ground and see how long it lasts.

TL;DR Wood doesn’t like moisture, and if you don’t listen then you’re going to have a bad time.

Update: As of May 2017 and no more riding in the rain, the bamboo managed to dry and the split sealed up. The ride is much less spongy/flexy than before, so I think it will now officially become a fair-weather bike.