Originally posted on The Ubyssey.

Oh boy, some beginner trip this turned out to be.

As a new member of the VOC, it quickly became apparent to me how “beginner” can take on drastically different meanings. In retrospect, I should have read the wiki page on “The 5 Definitions of Beginner Friendly” before agreeing to this little excursion, but a bit of Type II fun (not fun during, but makes for a great story later) never killed anyone, right? To be fair, Mike, the trip organizer, did specify this was a “beginner plus” trip, but my willingness (or call it ignorance) got the better of me.

The item on this weekend’s menu was the Howe Sound Crest Trail, featuring a 29 km walk-in-the-park and a healthy serving of root gardens, rock faces and boulder fields, garnished with majestic summits along the way. We split into two groups at the pre-trip meeting. Team Slog would travel north to south and Team Carrywater would travel in the opposite direction. Team Slog would be starting from sea level with a climb of 1500 metres and Team Carrywater would have no water refill spots during the first day. Team Slog was the more popular choice at a ratio of 3 cars to 2; obviously elevation was preferable to thirstiness.

Team Carrywater arrived at the Cypress trail head around 8 a.m. With our packs on our backs and boots on the roots, we began our adventure. The first viewpoint was St. Mark’s Summit, about 5.5 km from the trailhead. It was a relatively easy-going trail even with the constant elevation gain and handful of log hurdles. We enjoyed the pleasant view of Howe Sound while loading up on some snacks. Based on the presence of touristy folks, I concluded we still had quite a ways to go. The most difficult part for me was trying to figure out how to stay balanced while carrying a 60-pound backpack; being top heavy was definitely something I wasn’t used to. Not to worry, I still had a few kilometers to get used to it before the real fun began. 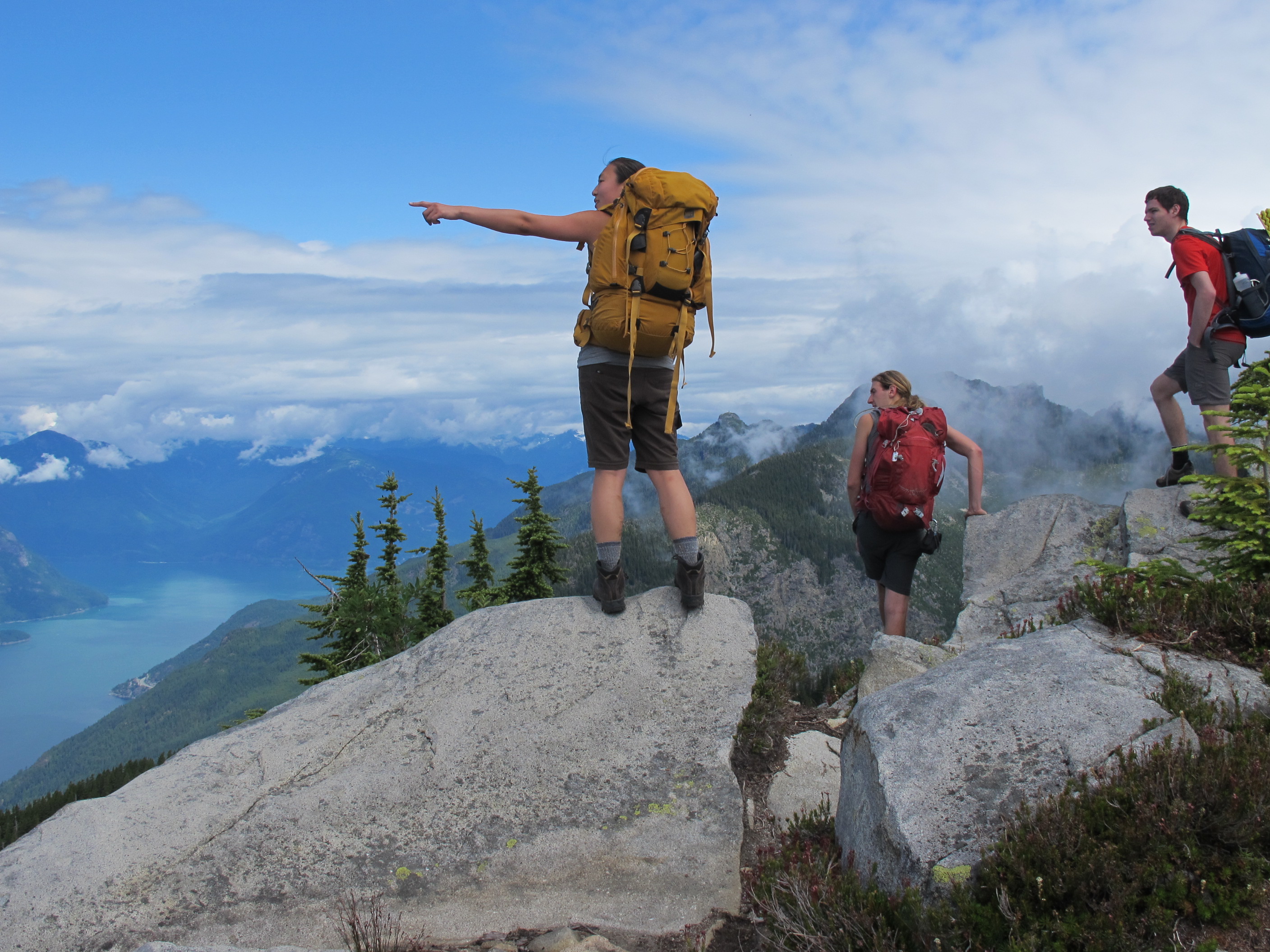 As we continued northward toward Mt. Unnecessary the trail began to narrow and evolve into a slightly trickier, but manageable, beast. The forested area began to thin out, and a couple forehead sweat-wipes later we were hiking out along the mountain ridge. While I was too busy focusing on my footing and trying not to tip over like an inverted pendulum, I hadn’t even noticed how spectacular the view was. Hiking through lush greenery was one thing, but traversing a rocky slab surrounded by an expansive view of the mountains and sea was on a whole different level. We approached a fairly steep climb along the ridge, but with the dry conditions and help of our trusty hiking boots, we didn’t leave anyone at the bottom. A few more sweat-wipes later and we were soaking in the glorious view of Howe Sound. A herd of mildly ominous-looking clouds peered from the east, covering portions of the Lions in the distance. The Weather Network reported a dry, sunny weekend, so why should we have anything to be concerned about? It’s not like they’ve been wrong about the weather in the past…. Did I remember to bring a rain jacket?

Continuing on from Mt. Unnecessary to the Lions was mostly harmless, aside from losing sight of the next trail marker and the rest of my group, accompanied by the reassuring sound of complete silence in the wilderness. Fortunately a pair of hikers (who were ironically lost themselves) coming from the opposite direction helped locate the next trail marker. Team Carrywater somehow managed to regroup along the trail and we collectively made it to the next summit. We enjoyed the gorgeous view while consuming our much deserved lunches. 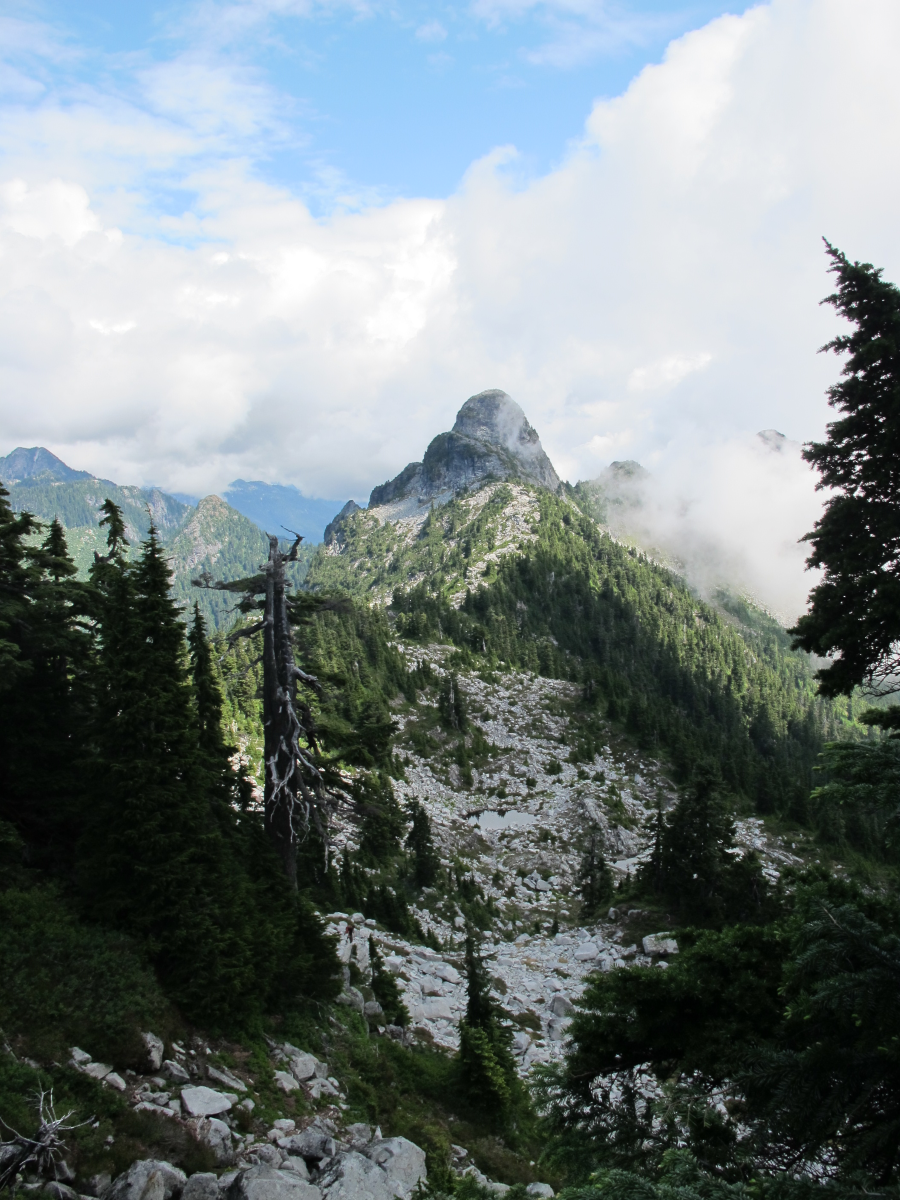 There was some discussion about scaling up the West Lion, but glancing over to what looked like the future death of me, I took the train back to Nopeville and happily continued eating my PB&J pudding. The more adventurous members of Team Carrywater quickly finished their meals and began their ascent up the West Lion. The three of us who held back watched from a comfortable distance, as if we were filming a National Geographic series on the spider man-like abilities of mountain goats. Shortly after sub-team Sketchy Scramblers were out of sight, sub-team You Only Live Once continued along the the trail toward our destination for the evening.

The terrain was magnificently diverse, ranging from switchbacks through flowery meadows to White Walker-esque boulder fields. Step by step, I began to fully understand why this was a “beginner plus” trip. Having decent cardio was the only thing keeping me alive. We arrived at James Peak to a panoramic view of our days work. Seeing the mountains from this perspective was something else, and infinitely better than the view from the city that I’m accustomed to.

Many sweat-wipes and bushwhacks later, we finally arrived at Magnesia Meadows, our tent site for the night. Some of us relaxed while others took a side trip up Mt. Harvey. We met up with Team Slog and shared the evening with the rest of the VOC party. As the night grew older, we gathered on a slab of rock and bundled up in sleeping bag burritos to watch the sunset and stars. 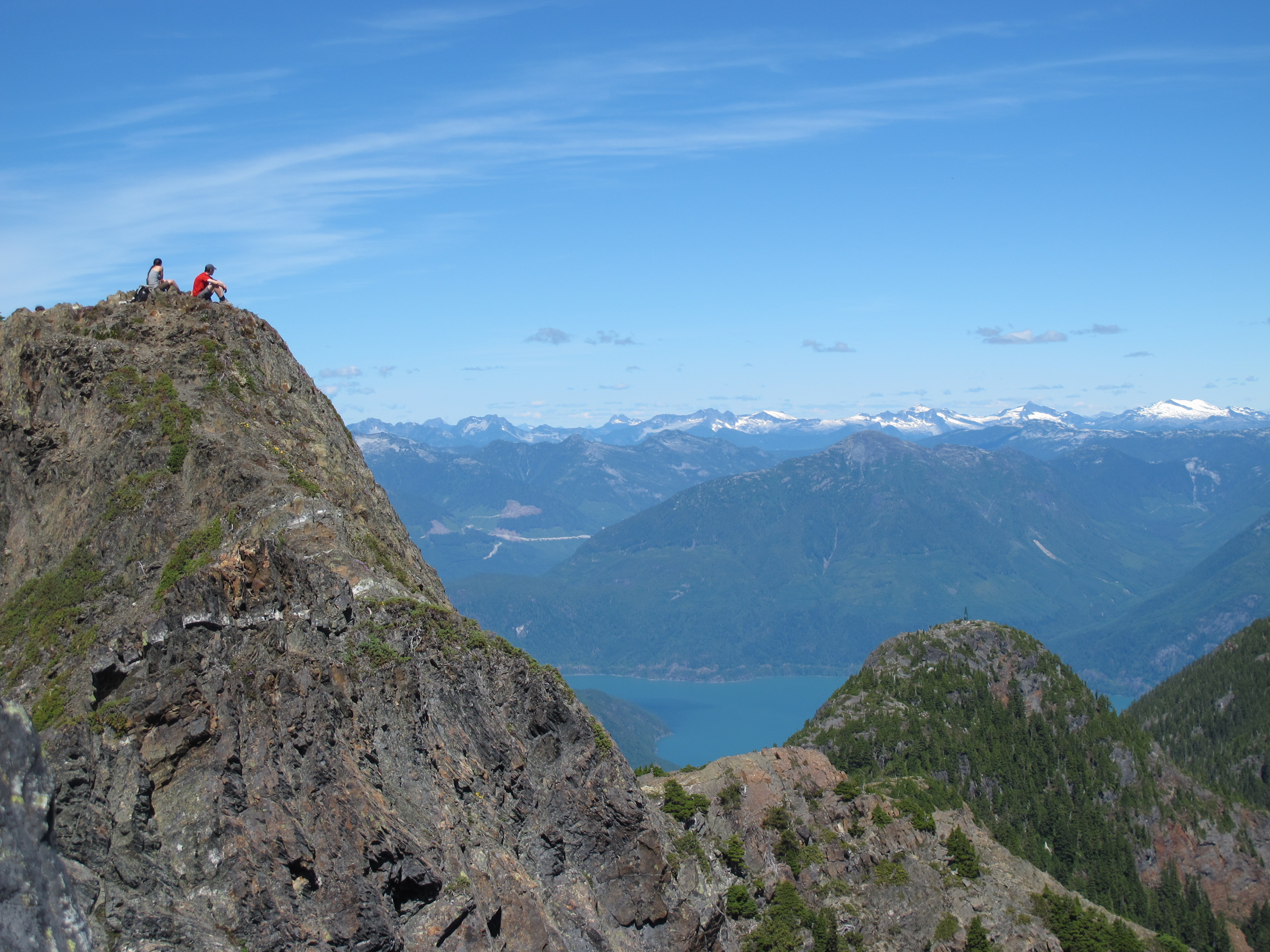 As beautiful as the evening was, the fact that it was the summer solstice literally made it the worst day in the year to be stargazing. The extended sunset sure was splendid though!

The morning came and we parted ways with Team Slog after breakfast. Team Carrywater marched through the meadows until reaching the base of Mt. Brunswick. We dropped our packs and hiked up the surprisingly steep trail. Have I mentioned how pleasant it was to walk up a waterfall of loose rocks? Again, 100 per cent beginner plus but the scramble was totally worth it, especially the 360-degree view.

Going down a loose, steep trail was a challenge. I considered trying to use gravity and momentum to my advantage, but common sense suggested otherwise (with good reason). We eventually all made it down back to our packs where we enjoyed the remains of our lunch and continued on the latter half of our trip. 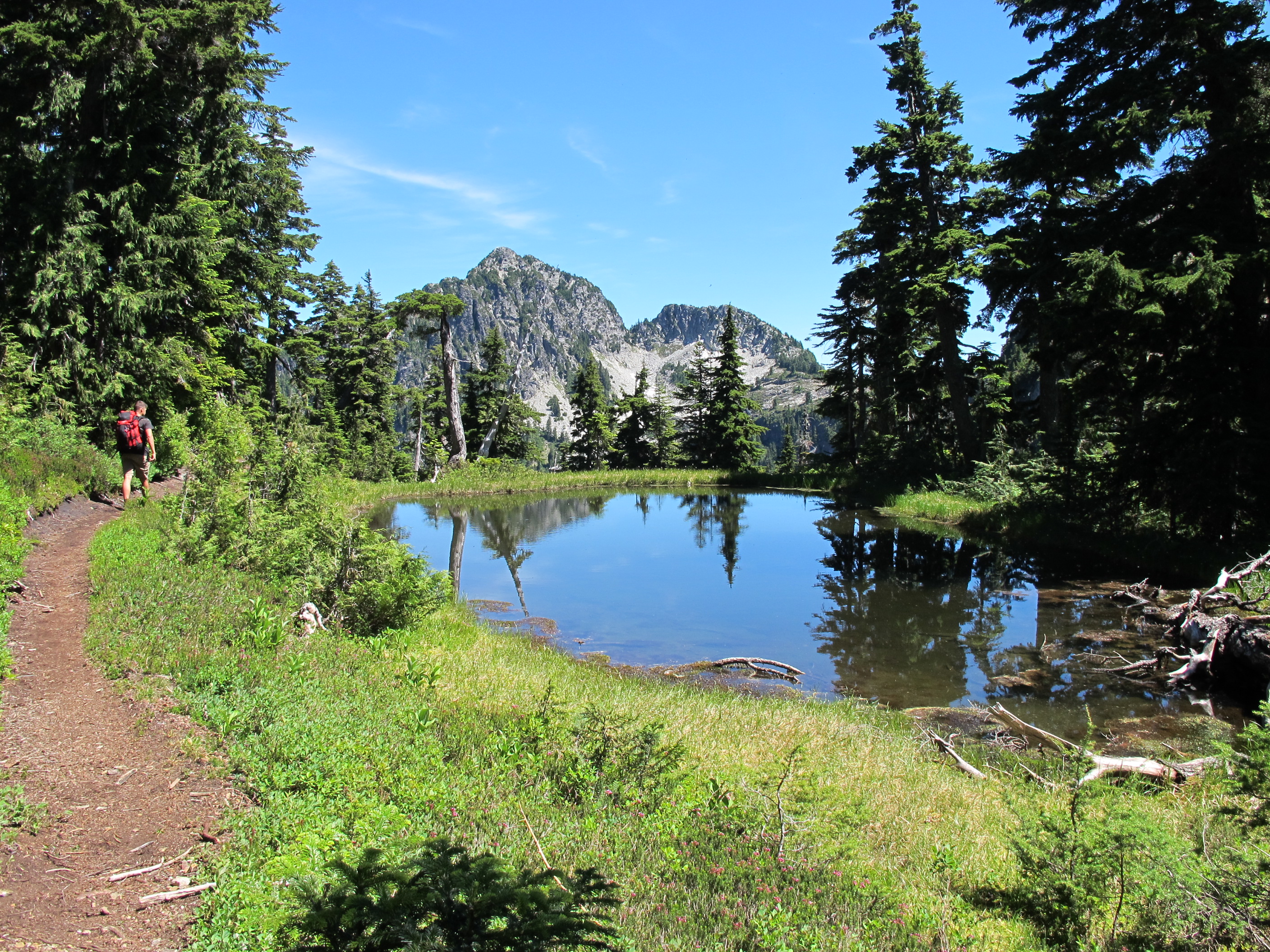 Woo hoo, it was all downhill from here! Literally, not figuratively.

As a group, the hardest decision was which of the three beautiful lakes to swim in. We skipped the first lake with some hesitation, but the second was just as marvellous. The lake was refreshingly cold and the weightlessness of water was a treat to our tired bodies. We relaxed on the stranded logs and dried off in the sun before returning to our journey.

The trail was much more leisurely than the previous day, and we all made it to Porteau Cove in one piece. We finished early so we ended our trip at Elwood’s and enjoyed their Sunday special, a $5.50 meal of steak and fries.