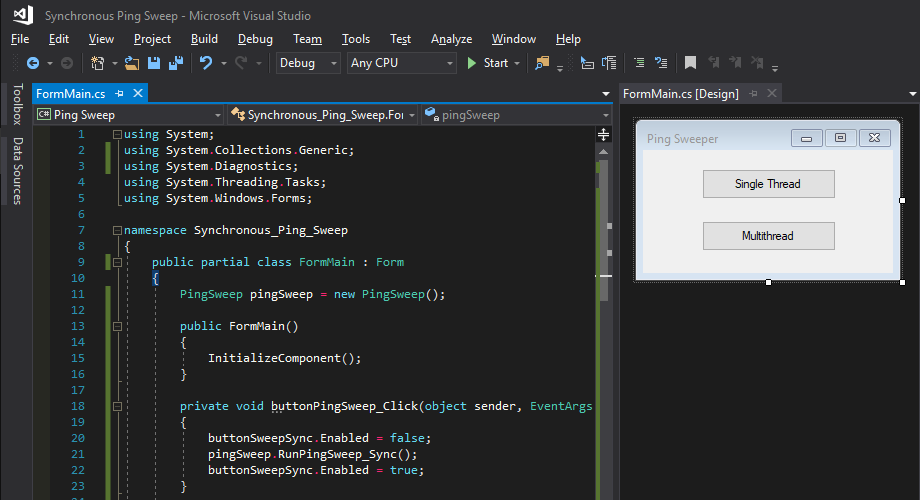 As a mechatronics engineer (in training), sometimes I like to pretend that I also know how to program.

In my most recent adventures to software land at MistyWest, I needed to write an application in C# that involved doing a ping sweep to find devices that were physically connected through ethernet. Since Google and Stack Overflow are my two best friends, I was able to find (what seemed to be) an off-the-net solution quite quickly.

However, despite this being a relatively well known objective with well-known libraries to accomplish it, my journey to developing a solution was not as easy as I originally thought. The following post outlines the things I tried before arriving to a working solution, which hopefully is at least mildly interesting and/or educational. Also if you’re a software engineer reading this, please go easy on my code. Or not.

A quick Google search showed that pinging addresses is dead easy in C#. Using the System.Net.NetworkInformation namespace, we can easily use the Ping.Send() command to check if a remote address is alive.

This is great if we only had a few addresses to ping, because unfortunately this method is unacceptably slow for a user waiting to see if any devices are found. Although Ping.Send has an overload to accept a timeout interval, it appears that setting very low values doesn’t actually change much. From the MSDN docs:

When specifying very small numbers for timeout, the Ping reply can be received even if timeout milliseconds have elapsed.

In practice, it seems that ~500ms is about the fastest threshold that can be set. Unfortunately, scanning 255 IP addresses this way will be excruciatingly slow (for both the developer and end user). And the search continues…

A few more Googles later and I had what seemed to be the golden solution.

Thanks to Tim Coker, I thought I was mostly done my application already (knowledge is half the battle, right?). His console application worked wonderfully and was written in C#, which was great news since I was developing the application using Windows Forms. Instead of using the synchronous Ping.Send(), it harnessed the asynchronous Ping.SendAsync() along with the CountdownEvent class in System.Threading. However, upon copying the code into Windows Forms, it didn’t seem to work. What gives?

Lesson learned: Console applications and Windows Forms are different beasts and deadlocks occur with the above code. According to Hans Passant from another Stack Overflow thread, the additional UI thread is the culprit:

Winforms has a synchronization provider whereas console apps do not. The problem is that the Ping class makes a best effort to raise the PingCompleted event on the same thread that calls SendAsync(). So it tries to raise the event on the main thread, but that can’t work since the main thread is blocked with the countdown.Wait() call. In a console app however, the PingCompleted event will be raised on a ThreadPool thread.

Hm, turns out this problem wasn’t as easy as copying and pasting random code off the internet. Time for a bit of research!

For some reason that can only be to confuse inexperienced programmers like myself, there are two different asynchronous ping methods in this class. First on the list:

Ping.SendPingAsync(): Sends an Internet Control Message Protocol (ICMP) echo message to a computer, and receives a corresponding ICMP echo reply message from that computer as an asynchronous operation. - MSDN

Based on these method descriptions, it appears that SendAsync() does not guarantee asynchronous operation. Since we just learned how threading in console applications vs windows forms is dealt with differently, this may be why it didn’t work as expected in the latter case. What we want are guaranteed asynchronous operations, so hopefully SendPingAsync() should perform to its name.

The takeaway: Use SendPingAsync() or bust.

So we’ve selected our asynchronous ping method, but that still leaves us hanging over how we’re going to handle it in a background task. Before .NET 4.0 was released, BackgroundWorker was the de-facto standard1. However:

The core problem that BackgroundWorker originally solved was the need to execute synchronous code on a background thread. If you’re using it for asynchronous or parallel work, you’re not using the right tool in the first place. - Stephen Cleary

After .NET 4.0, we have the following options:

Discussing each of these methods is beyond the scope of this post, but you can read more on Cleary’s article on various implementations of asynchronous background tasks. In short, using Task-returning asynchronous methods is the best overall method to use.

For my application, sending each ping to its own task using async/await is logical, as I could then call Task.WhenAll() to wait until all pings have been received back to the main thread.

However, I could still use BackgroundWorker for SFTP file transfer from the remote devices to a local directory (required in my final application, but not included in this ping sweep demo). Doing so would prevent the main UI thread from hanging while files are being transferred. Although async/await may also be used for this, BackgroundWorker seemed to be the more appropriate (and easier) implementation since each file is serially transferred from remote to local device. Additionally, it’s just drag and drop in WinForms!

The takeaway: Use async/await for asynchronous ping sweep, and BackgroundWorker for SFTP file transfers.

Finally, we have a working solution! Using async/await with Tasks in System.Threading.Tasks yields promising results. See below for the implementation.

Asynchronous pings are light years faster! Half a second and we're rocking with all the pings we needed.

To make sure our numbers add up, let’s compare it with a known tool that is much more mature than this C# application. 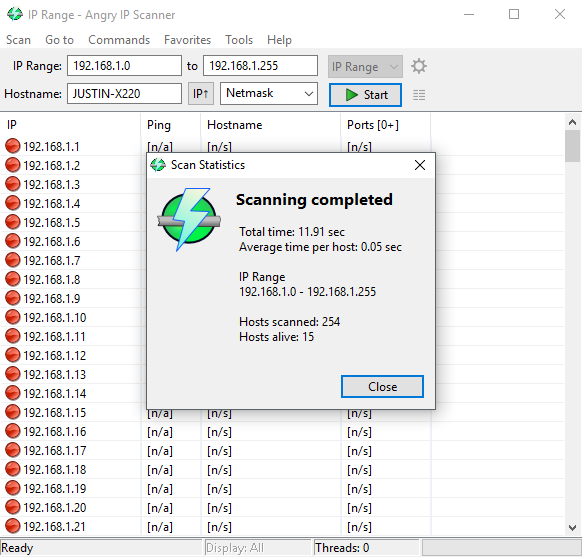 Same number of hosts alive, but a little slower. However, Angry IP Scanner is more robust in its pings and thread handling, so the few extra seconds is likely put to good use. I found my application to be somewhat inconsistent in finding all the alive hosts, which may be mitigated with multiple ping packets to send (instead of just one).

Because pinging is such an interesting past-time, let’s see how the very first synchronous solution performs using Ping.Send().

Result of 255 pings using a synchronous method. Nobody has 2 minutes to wait for a complete scan.

Wow. A full two minutes compared to less than one second. Life truly is better when you live asynchronously.

This concludes another adventure through asynchronous methods in C#. It’s amazing how much information is available on the internet, and I truly would not be able to get this far without it. Google and Stack Overflow, what would I be without you?

Thanks for reading, and I hope you learned a ping or two about these methods.

Check out the full source code of this project on Github!