Precision Sourdough: A Smart Lid for Your Starter

A few years ago, I had the idea to track my sourdough starter using computer vision. It was neat to monitor it this way, but it was fairly impractical to do for each feeding since it required setting up a camera, downloading the images, and doing some manual image cropping before running it through my analysis script. The analysis was also only done after the fact, and what I really wanted was something that could tell me when the starter was ready to be used (or fed), or, if I missed the window of opportunity, how long ago it peaked.

Last year, I came across this Reddit thread and Christine Sunu’s sourd.io project, where they both had distance sensors inside the lid to measure the height of the starter. I thought it was genius, and had to make one for myself! However, in addition to the live monitoring, I wanted to log the data for further analysis, so I also decided to make it internet-connected as a way to get the data off the device (since saving to an SD card would add hardware costs, as well as being less “sexy” in today’s world of everything having wifi connectivity).

Interested in making your own? All the design files and code can be found on GitHub!

Selecting, viewing, and downloading data for a given feeding session.

Aside: In honesty, this project took longer than I originally expected, and I had spouts of project fatigue where I had zero motivation to work on this anymore. Eventually, a third (or maybe fourth, I lost count) wave of inspiration came to me, and I managed to finish the last remaining bits of this project. I’m glad I did though, because this turned out to be one of the more nifty gadgets I put together. I’m telling you this because people are often talking about side projects and hustles (especially software engineers), and I want to say that it’s ok to focus on your mental well-being and just be a potato sometimes.

If you’re only interested in the resulting data that came out of this, you can skip to the end where I visualize the growth, temperature, and humidity from a few weeks of worth of feedings. Otherwise, read on to learn about the development of this high specialized, mildly esoteric kitchen gadget!

With the idea in mind, I bought the components off Digikey and AliExpress and hooked them up on a breadboard. The parts I used for this project:

I wrote some code to test that all components worked correctly, then went on to design a PCB to make it easier to integrate into the form factor of a jar a lid. 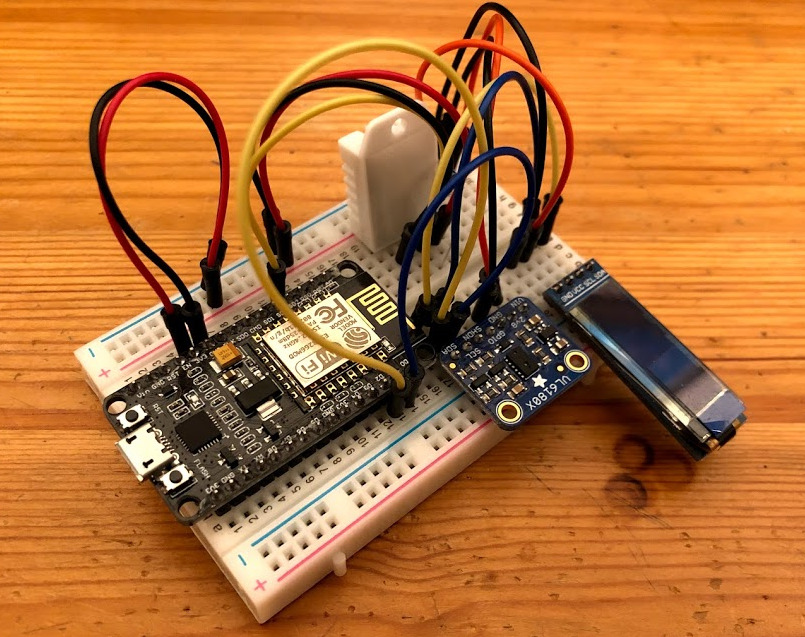 I’ve made PCBs using protoboards before (in my sous vide controller), but it was extremely time consuming. Since I surpassed the learning curve of designing boards in KiCad, now I’d rather wait a few weeks for the boards to show up from overseas, especially since it’s so cheap ($2 for 5 boards, plus $14 shipping).

Top of the PCB with the display (left), bottom with the distance and temperature/humidity sensors (right).

At this point, I was eager to try it out, so I cut a hole in a plastic yogurt lid and taped the assembled PCB on. 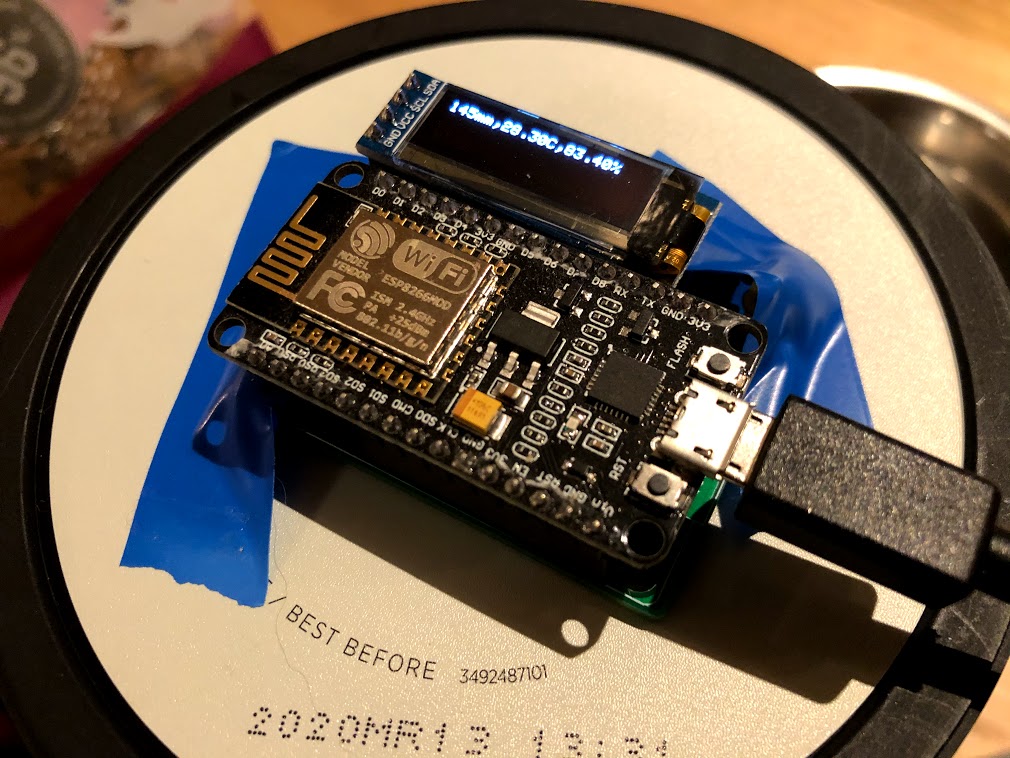 It ain't pretty, but it works.

It worked well enough to test out the initial workflow, and I realized that I needed few crucial things to make the measurements actually useful:

With a bit of algebra and math, these values were now measured by the distance sensor, mounted at the bottom of the lid. 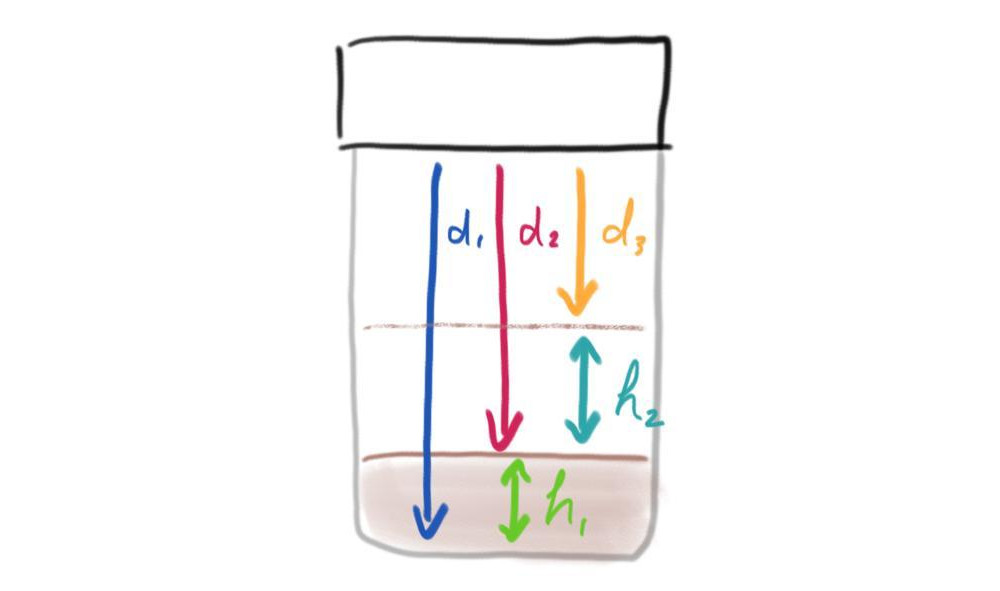 And the governing equations:

Resulting in our formula for calculating the rise percentage of the starter!

I designed the enclosure in Fusion 360 and printed it on my Monoprice Mini 3D Printer. 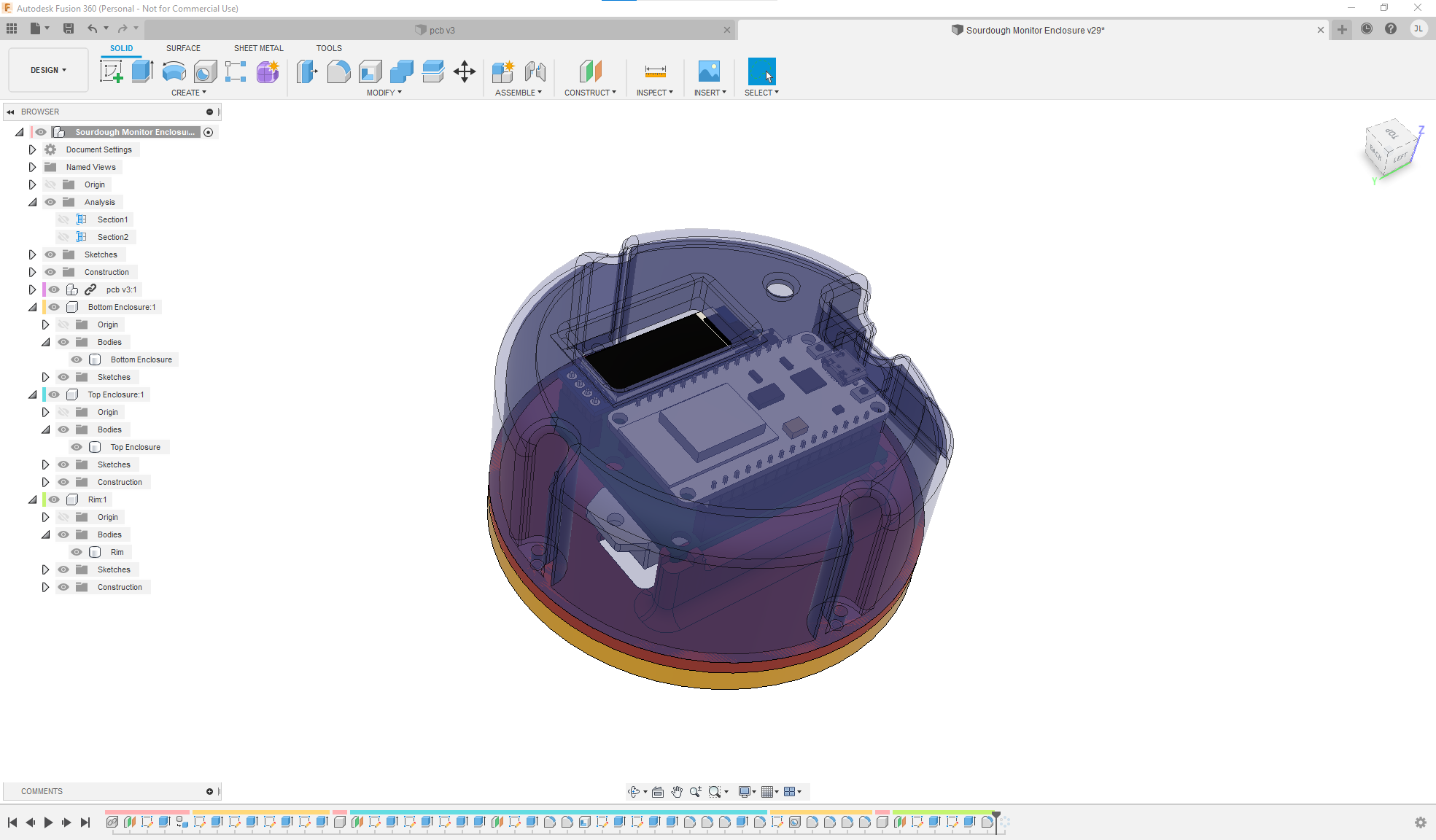 I wasn’t the proudest of this design, since I had to resort to using hot glue to attach the PCB to the enclosure, mainly because I forgot to leave enough hole clearance on the PCB . Ideally, the PCB would drop into the top half and assemble from the back (instead of the bottom half, as designed), but unfortunately I didn’t have this forethought. I was designing the PCB to have a minimal footprint to keep costs low, instead of making it easy to integrate with!

Since I didn’t want to solder the modules directly on to the PCB, I used female headers to keep them removable. However, this gave the assembly quite a bit of height, which resulted in the button needing some type of extension. I didn’t want to make another Digikey order specifically for this button, so I decided to be resourceful and glued a machine screw to the button to make up for the missing height. 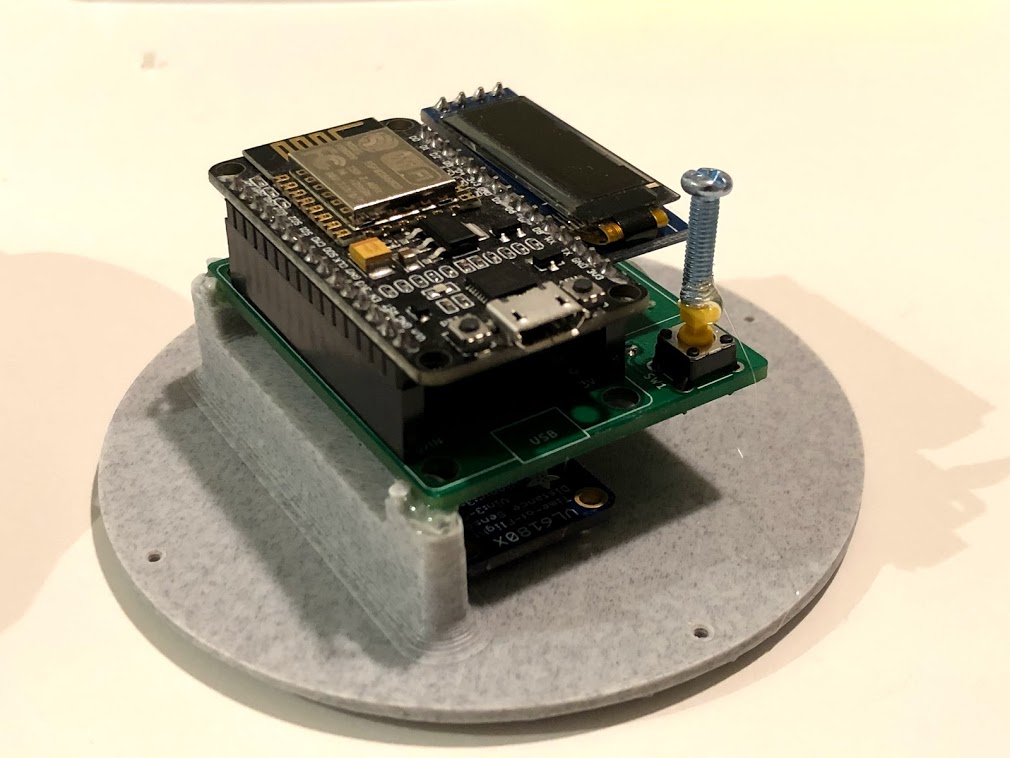 Yes, that's a machine screw hot glued on to a switch...

Anyway, it assembled together without issues, and the only mistake you can see from the outside is the screw head (or let’s just say I wanted to go for an intentional steampunk look)! 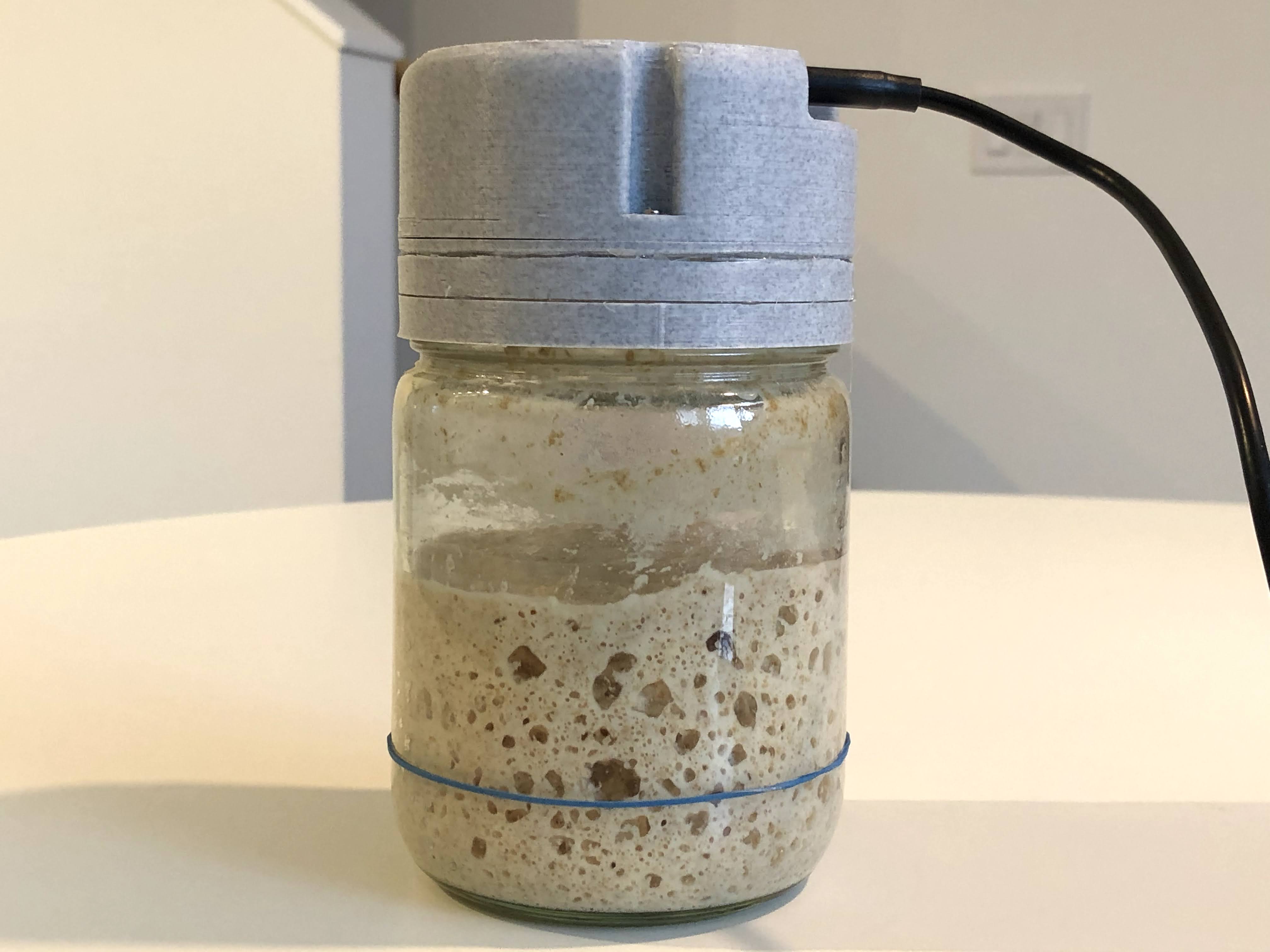 I wanted to use a task-based architecture, since having everything in a single state machine can become convoluted and difficult to debug. With multitasking, the processor is only executing a single task at any given time, but it switches between each task rapidly to give the illusion of concurrency. I’ve used FreeRTOS in other projects, but wanted something more lightweight since I didn’t need all the bells and whistles that it provides.

I eventually came across TaskScheduler, a cooperative multitasking framework, which checked all the boxes I needed. 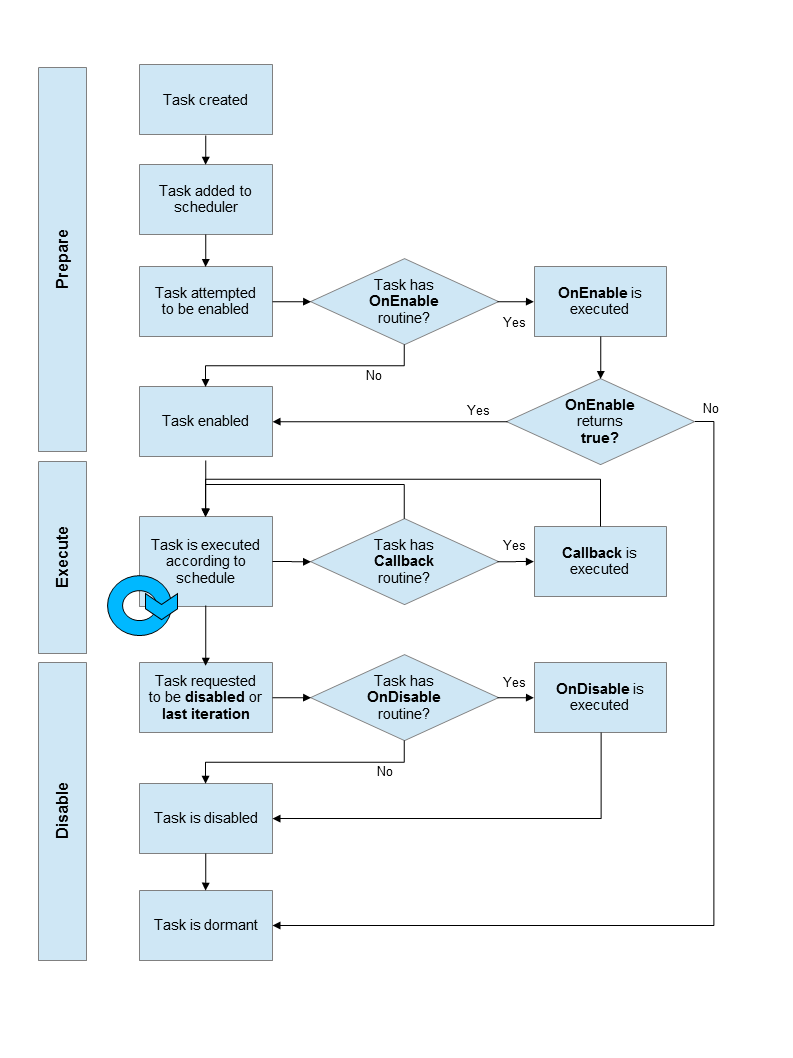 A lightweight implementation of cooperative multitasking by TaskScheduler. (Source: GitHub)

The code was divided up into the following tasks/files:

The benefit of this architecture is that each file is less than 200 lines of code, and the clear separation of concerns made it easy to develop and debug. 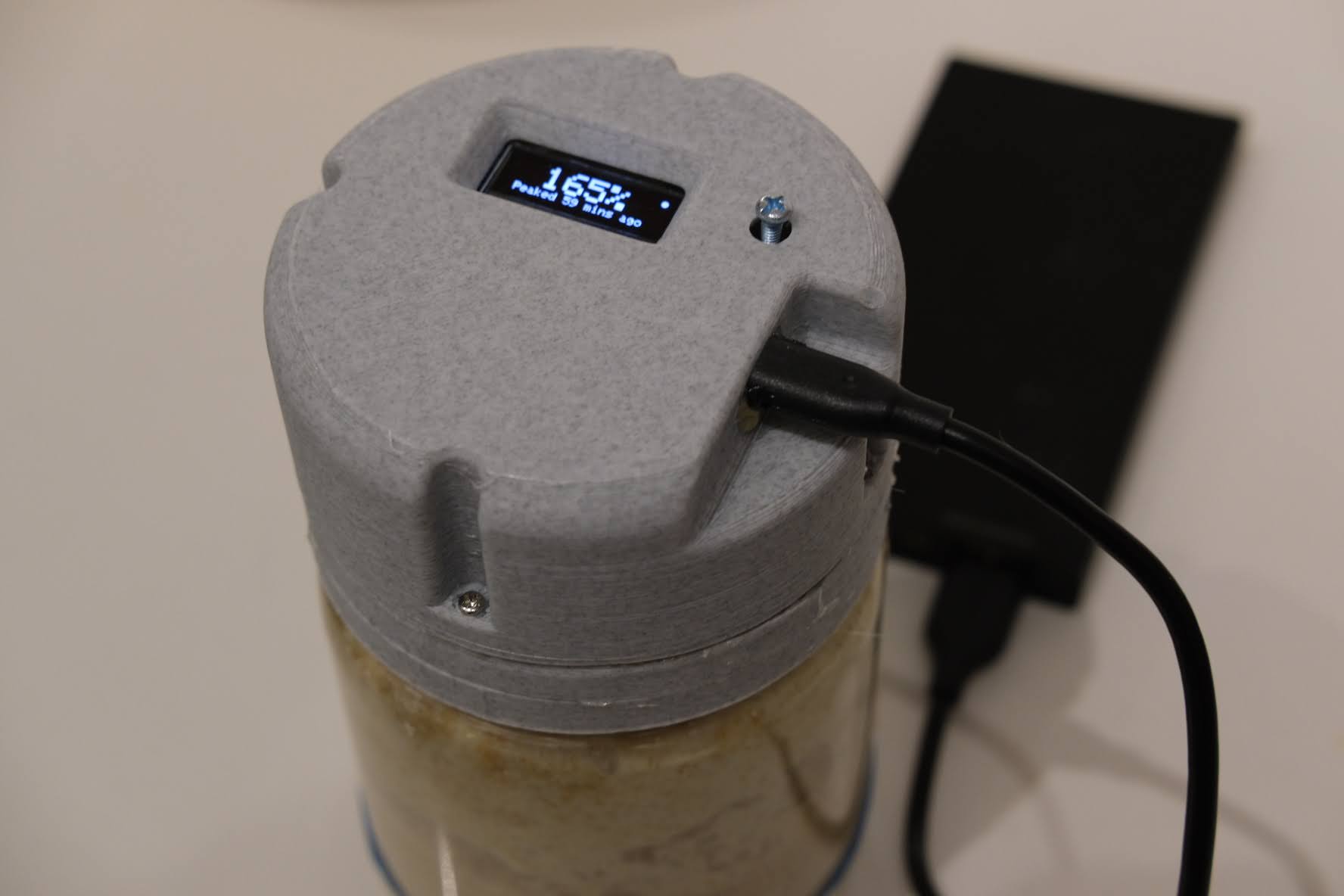 The display shows how much it peaked, and how much time elapsed since it peaked.

With the architecture in place, the firmware itself was fairly straightforward. The only “fancy” thing I needed to do was save the jar height to EEPROM so that it would be saved between sessions, even if it’s powered off. Interestingly, the ESP8266 doesn’t actually have genuine EEPROM memory, so it’s emulated by using a section of flash memory.

One of the more time consuming parts of this project was actually getting AWS set up on the ESP8266. I encountered many library compatibility issues, which I should have expected since this chip was released 6 years ago (at the time of development)! If I didn’t have an ESP8266 in my box of parts that I wanted to use, I would have used the newer ESP32, which (hopefully) would have presented fewer issues.

If you’re looking to do the same, let me save you some headache! You can check out the template I made on GitHub to get set up.

Once I got it publishing messages over MQTT to AWS, I set up the cloud infrastructure to receive and save the data. The data flow was: 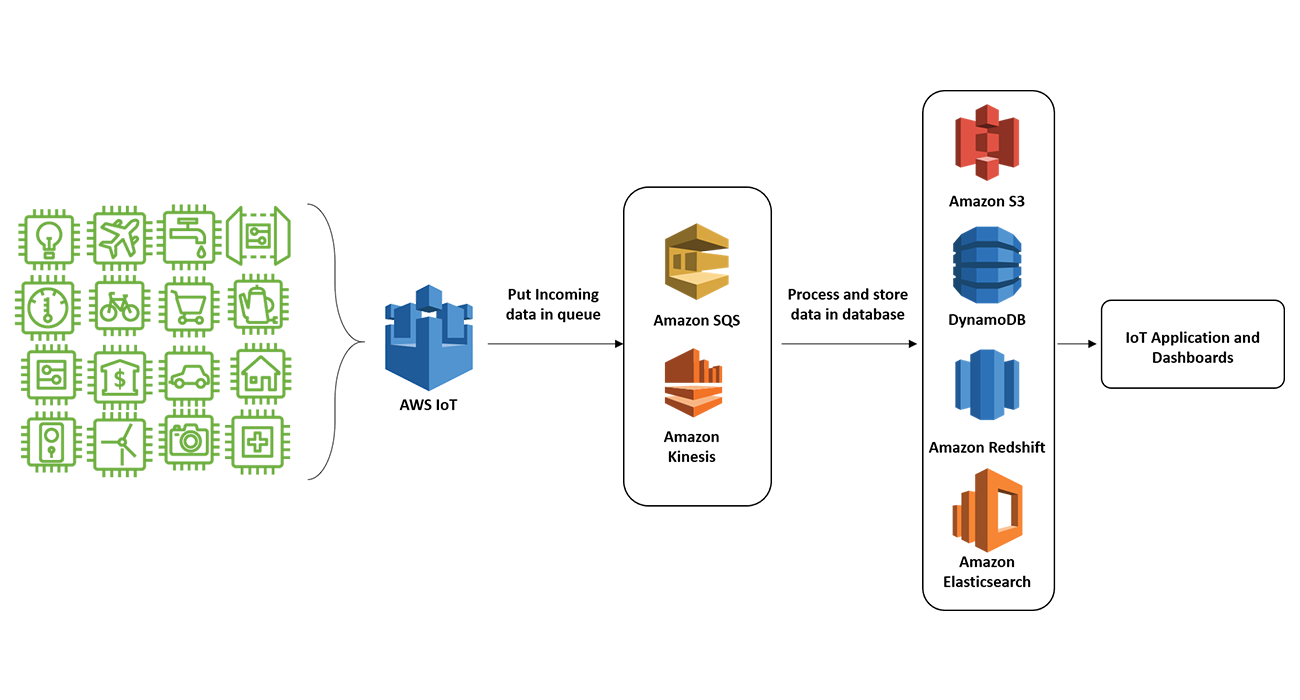 I initially was going to use Amazon QuickSight to visualize the data, but there were limitations with the refresh rate that were a deal breaker for me. Instead, I bit the bullet and created a custom dashboard using Flask and HTML/CSS/Javascript, which queries data from S3 using Amazon Athena. I was too lazy to figure out how to host the dashboard on AWS for free, so I opted to use Heroku (as I’ve done previously for my recipe converter web app).

With cloud connectivity and dashboard complete, the sourdough monitor was now ready to be used!

The main purpose of the monitor was to help with my timing of when to use the starter. Since the data was being collected anyway, I figured I might as well do some analysis to see if there was anything significant.

After using the monitor for a few weeks, I had enough data to play with. The two main things I was curious about were:

Doing a quick kernel density plot to get a feel for the data, we see some clustering but no obvious trends. 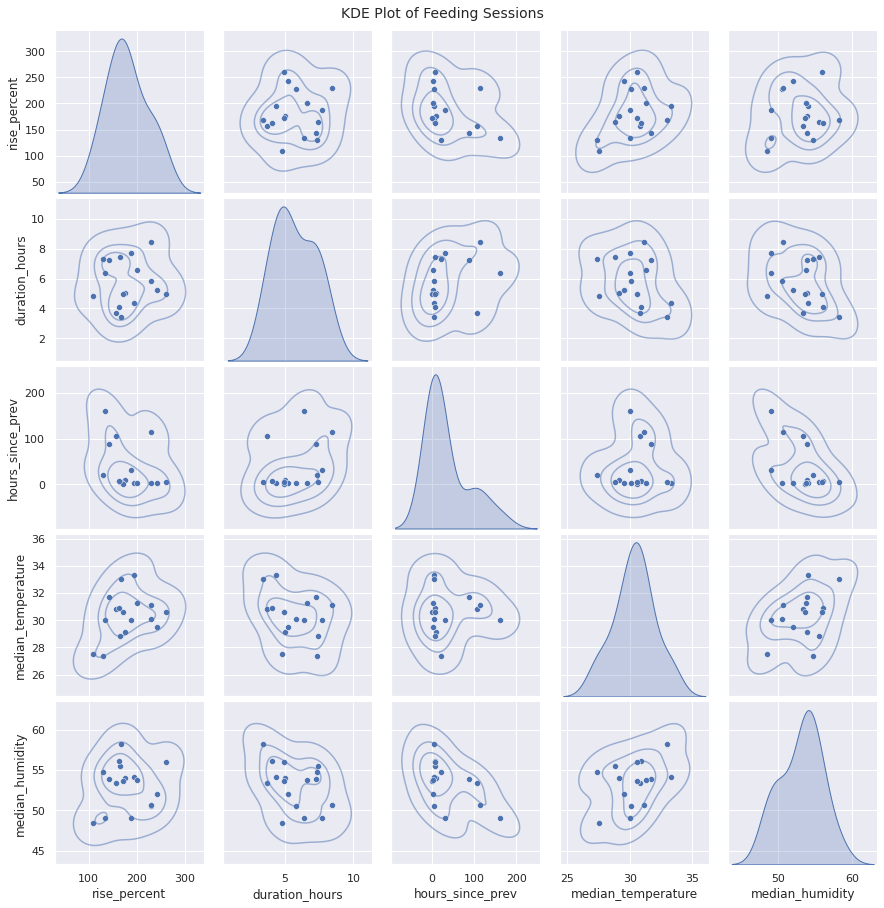 Kernel density plot to show the distribution and clustering of data. No clear correlations are present...

The graph below shows the consistency of my feedings:

Note: The horizontal axis is a bit off since some days had multiple feedings, the graph assumes each feeding is a separate day. 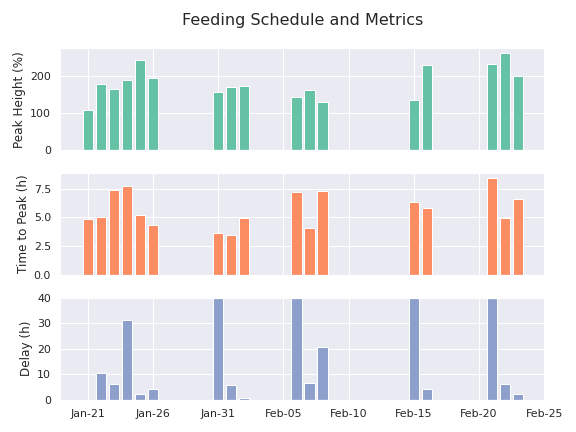 Feeding schedule over the past few weeks.

The graph below shows no correlation between how long it took for the peak rise to occur. It also didn’t seem to matter if the starter was kept in the fridge for a few days, which is great news (and maybe not news to those who know their starter well)!

No statistical significance between the most relevant metrics.

Looking at the time series data, we see the progression of the rise height from the first to last feeding. Some observations:

Note: I used a temperature controlled proofing box, which is why the temperature and humidity are constant throughout the majority of the fermentation. The temperature was set to 24°C for most days, but interestingly the recorded temperature was typically around 30°C. More testing is required to see which sensor is correct… 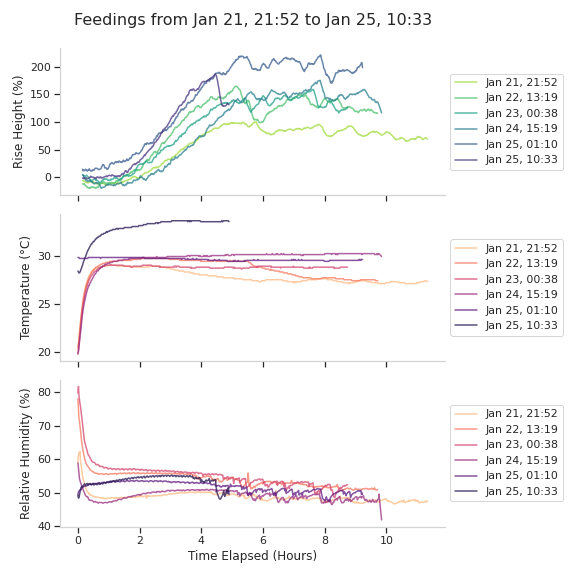 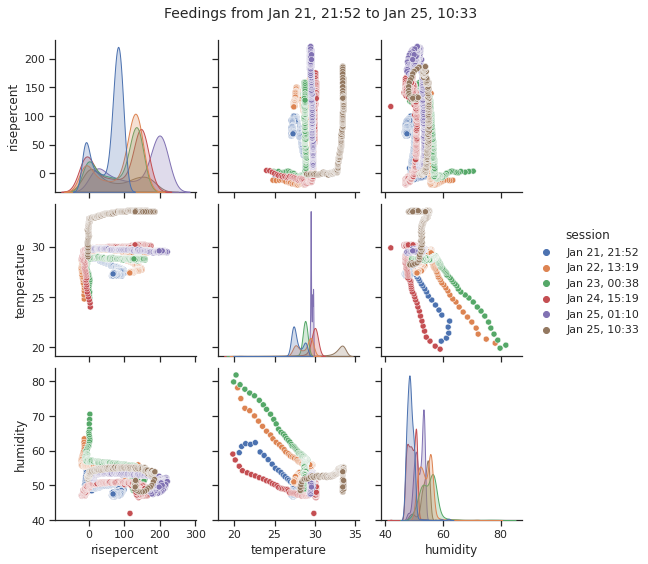 Pair plot of the time series. Not much to show, except that temperature and humidity are correlated (as expected).

The rest of the feeding data can be found in the combined figure below. There are a few interesting things that occurred, but further experimentation would be required to draw any conclusions:

Visualization of the rest of the feeding data, for those interested.

So basically, what the data is telling me is that there are many other variables at play, and I’ll need to record a few other metrics in order for the measured data to be actionable, such as:

Other experiments that I’d like to nerd out on:

So after all this, the takeaway might actually be that timing the starter isn’t all that important, since it stays active at its peak for at least a few hours. And if you maintain a somewhat regular feeding schedule and have a relatively stable environment, then you can probably get a good feel for how long it takes your starter to grow (or you can set up a timelapse with your smartphone camera to see how it’s doing).

This was still a fun way to nerd out with baking, since engineers like metrics, and there’s a lot to measure with sourdough bread. Although this gadget might seem superfluous to some, I enjoyed the precision and confidence it gave me in taking out the guesswork of how my starter is doing. There’s two types of bakers in the world: those who go by feel, and those have a 0.01 g resolution kitchen scale. Guess which one I am 😏

A darn nice crumb, if I do say so myself!

Hope you found this enlightening, and if you have any other ideas on what experiments to try out, leave a comment below! If you like my content, please consider buying me a coffee!